How to View Android Screen On Time

Benchmark a smartphone that saves or wastes battery by looking at the Screen On Time. You can use Screen On Time or SOT as an accurate benchmark to determine which device you are using is battery-intensive or not.

This term has actually been quite popular for a long time but it turns out that now there are still many who do not know. Because people will look at the battery graph and not see how long the screen was on after the last charge. 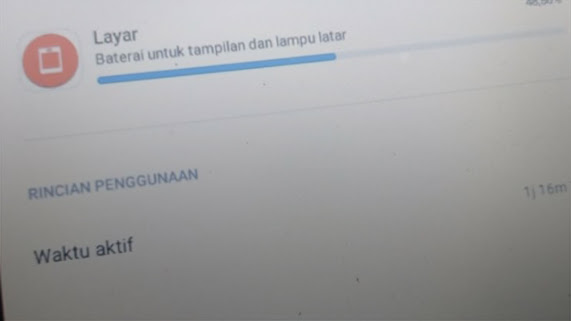 Apart from being less accurate the battery graph from the last charge is hard to read. While Screen On Time is a duration and I'm sure people will know the meaning of that duration. In general, you can check Android SOT in the Battery menu.

It's just that the menu display on each device can be different, but in general the data that appears is the same. The longer the screen is on, the more battery-efficient your device will be. Screen On Time Android or Screen Time Android is one of the benchmarks when testing battery power.

Before proceeding to the discussion, you need to know the solution to overcome the launcher stopped on Android. Launcher or launcher is a system theme that makes Android devices have an attractive homepage and easy to use.

How to View Screen On Time or SOT

Step 4: In the active time section, that's what is called Screen On Time or SOT

So that's how to check SOT on Android and you can do it any time. To determine the correct SOT you must fully charge the battery. Because if the charging process is never fully charged, the SOT will not be reset and the graph will fluctuate.

You can see the Screen On Time after the battery reaches 20% or 15% after the last charge 'to full'. If it is not full, the SOT will take a long time but it will not be accurate because it is combined with the previous SOT.